A report issued by the automotive unit at the W7Worldwide consulting agency found that due to the permission granted to women for driving in the Kingdom, the sharp decline in the sales of the automotive sector will slow down in the first half of 2018. Starting at 3 per cent, it is expected to increase to 4.1 percent by the third quarter of the same year.

Classified under the reference number CAR0017, the report identified that the King’s decree to allow women to drive in Saudi Arabia will push cash payments for automotive companies and its local agencies after the sharp decline in its profits during the first half of 2017.

The recent Saudi report eased the anxiety and apprehension of automotive dealers that was initially caused due to the sharp fall in sales that further led them to layoff several employees.

The estimates pointed out that the current half of the year witnessed a 30 per cent fall in the sales of cars in the GCC, where Bahrain was affected the most with 41 per cent fall in sales, followed by Saudi Arabia at 38 per cent and then Emirates at 28 per cent. Moreover, seven of the most notable international car distributers faced a 32 per cent drop in their sales that amount to a total of 116 thousand cars as opposed to 170 thousand cars in 2016. 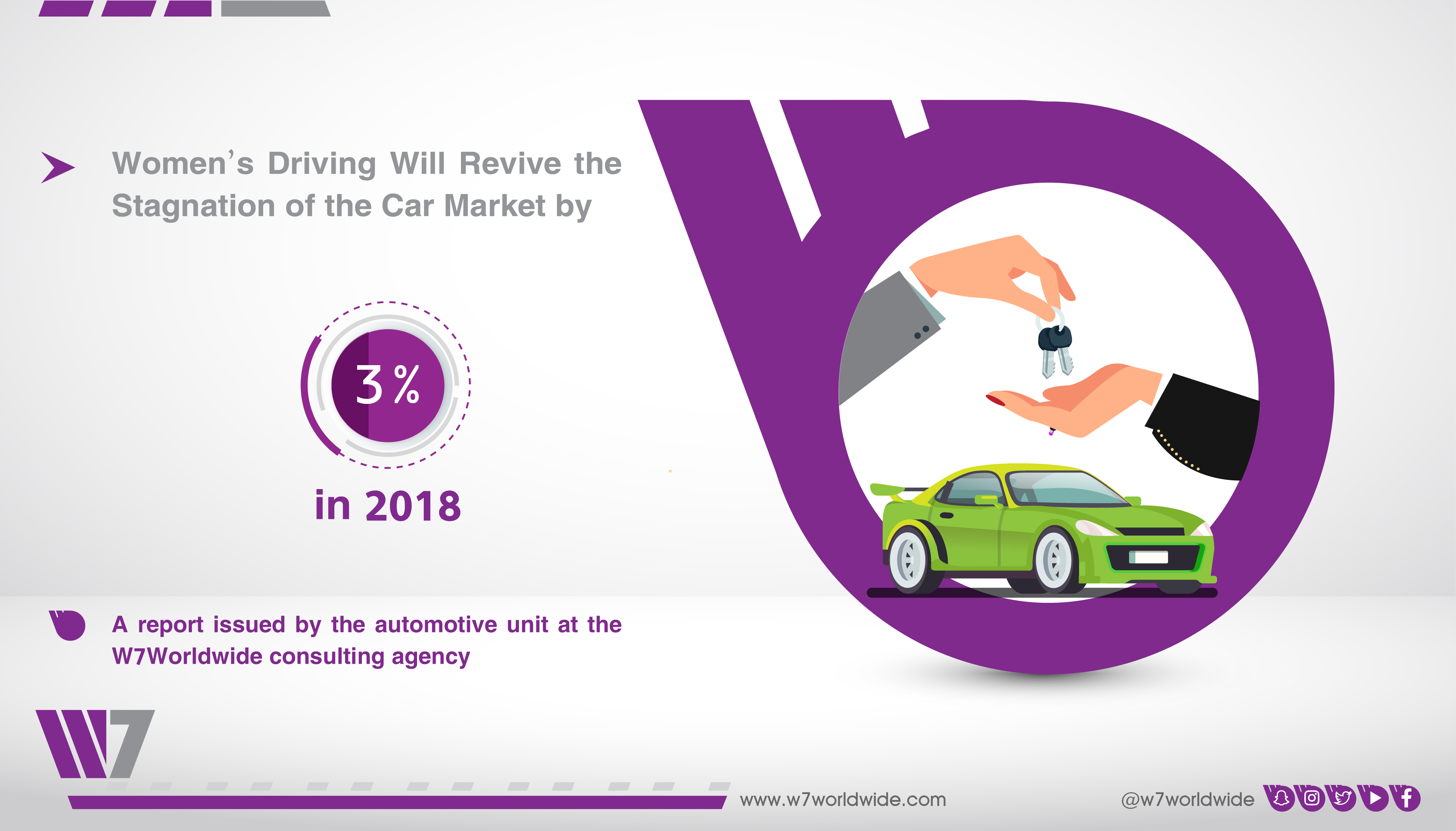 The supervisor of the automotive unit in W7Worldwide, Yousef Inayat, mentioned in the report “The Saudi and the GCC Automotive Sales… Details of the First Half of 2017” that the natural drop rate of sales internationally falls between 10 to 20 per cent. This falls amidst the expectations considering the approaching recession with hopes of recovery of especially the automotive market as a result of the introduction to the Value Added Tax in the GCC of 5% in the beginning of 2018.

The report of the agency relied on various reports of car sales that prompted the Gulf countries to reduce their imports of cars. Saudi Arabia accounts for half of the market of the Gulf car sector and has reduced imports at medium rates, where last year it imported 700 thousand cars compared to 900 thousand cars in 2015. This will coincide with the EXCS luxury cars exhibition that is scheduled for October 5-8.

Resuscitation of the Market

Yousef Inayat added that attempts by car dealerships and distributors in the region to offer to consumers, and to provide manufacturers with financial support to local distributors in the region have not succeeded in rising above the recession after the sharp drop in oil prices, which remain as the main source of income for the Gulf countries. This prompted Gulf governments to impose austerity measures and reduce public expenditure, which reflected on the incomes of citizens. Furthermore, the tension in the region, and rising fuel prices contributed to decline.

Amongst the offers approved by car agencies to resuscitate car sales in the Kingdom and the Gulf countries, the results of the launch of several promotional plans, including offers to extend warranty, providing free maintenance, providing benefits and services during sales and after-sale, without prejudice to prices, were disappointing. Less than half, in the second quarter of this year, led to a change in the price of cars, which failed to move the recession that hit the market.

Reasons for the Decline

The W7Worldwide report also attributed the reasons for the decline in sales of the automotive sector in the Kingdom: the decline in per capita income, the rationalization of public expenditure on projects, the decline of salaries of private sector employees, and the fees imposed on arrivals, which has made citizens and residents more conscious of their expenditure. These reasons have led the trend towards a saving culture in order to adapt to new variables.

At the forefront of reasons for the decline in Gulf sales was the rise in fuel prices. This resulted in reluctance of consumers to buy cars with large engines, and diverted their attention towards economical vehicles, which use diesel and electricity.

A deeper study of the reasons for the decline in Gulf sales also include the state of political tension in the region and the lack of rapid response acquired by car companies and agencies to curb the drop in sales. This would be the development of promotional plans based on reducing prices for consumers according to new indicators in the Gulf region.

The report’s supervisor, Yousef Inayat, highlighted the most crucial results of the decline in car sales, such as the decline in employment in this sector, and the reduction of the number of companies and agencies’ employees by at least half. This was the inevitable result due to the demobilization of major car agencies operating in the Kingdom with over 1200 employees.

The Future of the Market

The report does not expect a significant improvement in car sales in the Kingdom and the Gulf countries until 2019 due to two main reasons: the lack of significant changes in the economic structure, and the introduction of the VAT commencing in 2018. There is only a modest growth potential of not more than 5%. The report concluded that urban expansion and an increase in social requirements of Gulf families has contributed to the purchase of more than one car. However, the possibility of the return of major vital projects to Gulf countries, especially Saudi Arabia, which require fleets of small and large cars, will revive sales and lead to stable demand for cars in the coming period. In spite of these perceptions, the best time for a consumer to buy a car is before the VAT is imposed.