The Research and Analytical Study division at #W7Worldwide marketing Communications Consultancy Agency has revealed that 80% of global technology companies’ Twitter accounts use the Arabic language to support its communications with the target audience.

The research team has identified 10 social media account of several global technology companies – as a case study – according to a list published by Forbes published in June of this year. The companies are “Apple, Samsung, Microsoft, Google, IBM, Intel, Cisco, Oracle, HP, and Foxconn”

The results pointed out that 8 out of the 10 researched companies are using Arabic on their Twitter accounts when targeting the Middle East and North Africa region. The report coincides with the Arabic Language Day which takes place on December 18th, 2018 every year following a resolution of the United Nations General Assembly in 1973.

The Research and Analytical Study division at W7Worldwide considered that 80% of companies using Arabic is a positive indication of the usage of the Arabic language by global companies. The results showed that 37.5% of the companies surveyed are directly targeting the Saudi market. This is clearly evident in the company’s effort to support their communications platform through the usage of the Arabic language. 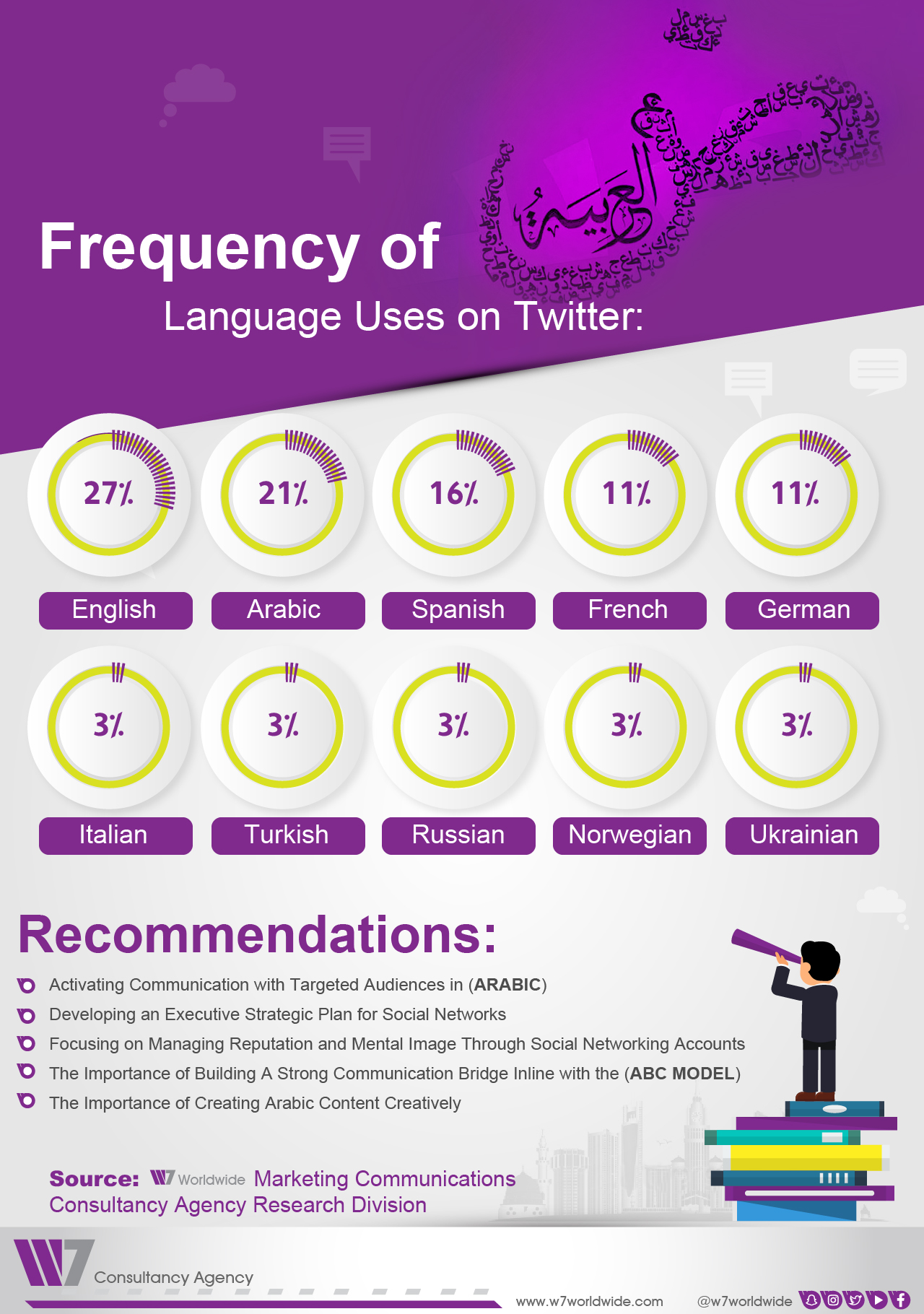 The report pointed out that in most of the global technology companies utilize the Arabic language in their communications on the platform and that they are increasingly laying more focus on the language to appeal to the audience.

As for the frequency of usage, the Arabic language got the second place at 21% while English came first at 27%. The Spanish language came third at 16% and French and German came fourth at 11%. Other languages including Italian, Turkish, Russian, Norwegian and Ukrainian were equal in terms of frequency of usage at 3% each.

The report presented a bundle of recommendations that would support the Arab content of the technology companies in general on Twitter, especially ones that are targeting the Saudi market, which is the most important market in the MENA region and Turkey. The recommendations include: activating communicating with the target audience using Arabic, the importance of a strategic plan to manage the social media accounts and the brand image and reputation in a positive manner and the importance of building a communications bridge in line with the ABC model. Furthermore, the report stressed the importance of developing Arabic content creatively that is compatible with the local culture.

Within the context of the Report, there are two levels when managing the accounts of global technology companies when it comes to Arabic content. The first level uses Arabic as the main language on the Twitter platform.

On the other hand, the percentage of companies using Arabic as a second language after English reached 40%. The important distinction to be made is that some of these companies, within the current level, target the Saudi business sector directly. The report outlines two examples of companies that use Arabic as a second language: the first being @CiscoSaudia. The account uses the English language when tweeting, with only one tweet in Arabic out of the 10 sampled, despite their Twitter Bio being written in the Arabic language. This poses several questions on the type of strategy followed when communicating with the audience.

The second example was @Oracle_ME, which targets the Middle East and North Africa (MENA) audience, and Saudi Arabia in particular. The Arabic blogging rate was one in 17 tweets, which affects the overall brand image of the account.